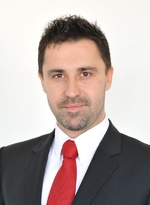 From 15 July 2014, Prague team of law firm Dvorák Hager & Partners was strengthened by Marek Bomba who was appointed as managing attorney.

Marek Bomba is a member of the Czech Bar and speaks English, Czech and Slovak.

Since 1 August 2014 Dominika Veselá became attorney-at-law in Dvorák Hager & Partners. Dominika graduated from the Faculty of Law of Charles University in Prague and at the same time from the Faculty of Finance and Accounting of the University of Economics, Prague (majoring Banking and Insurance). She works with our office since 2011 and in June she passed the Bar exam.

From August 2014 new attorney Jana Kolárová became a part of our team Dvorák Hager & Partners in Prague. Jana Kolárová practices in the areas of labour law and corporate law. She also has experience in litigation issues and real estate law. Jana came from the law office Kaplan & Nohejl.

Jana Kolárová graduated from the Law Faculty of Charles University in Prague. She also studied at the Ludwig-Maximilians-Universität in Munich.

Renáta Vrzáková joined the team of Dvorák, Hager & Partners starting August 18th 2014 as a marketing manager. Renáta graduated from Faculty of Physical Education and Sport / Master Management of Charles University Prague and before joining Dvorák Hager & Partner she worked in marketing departments of IBM and Vodafone.

The countdown is on 🕰. Its 6 days until our #Fintech/#PrivateEquity webinar. Panel sessions will be moderated by ou… https://t.co/mjfuo9E83B

The good news is that from 1 June real estate agents are among the businesses that may again operate, but it is not… https://t.co/8D5V1oQlZS

Points to consider when making an application under the Woodland Carbon Guarantee https://t.co/orlzv4bM5a

Our specialised patent attorneys are able to assist you throughout your patent application process. If you would li… https://t.co/O6cToQ9QTr

What you need to know about Corporate Insolvency and Governance Bill https://t.co/1XQBR59MIM

At MacRoberts, we are committed to reducing the #environmental impact of our business & continuously improving the… https://t.co/1EYWNVJQDW

The Department of #Petroleum Resources (“#DPR”) has announced the commencement of the 2020 #MarginalField #Bid Roun… https://t.co/ZGv4Lf5sCZ