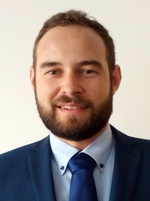 From 5 September 2016, the team of our law firm in Bratislava was strengthened by Tomáš Richter Urban. Tomáš is an attorney who specialises in private equity, banking & finance, business contracts and M&A transactions.

Most recently he worked in the law firm of Čechová & Partners. Before that he worked at Clifford Chance and Balcar Polanský Eversheds. He was also seconded to Tyco International Concern as regional counsel for Eastern Europe.

A graduate of the Law Faculty of Charles University in Prague, Tomáš also studied at the School of Law, University of Limerick in Ireland, focussing on law of contracts and European law. He also underwent a course of study in United States law and dispute resolution organised by John Marshall Law School in Chicago. Tomáš is a member of the Slovak Bar Association and the Czech Bar Association.  In addition to Slovak he is also fluent in English.

We are delighted to team up with @ScottishDLA & @SEMLAlaw to deliver an event on #unconsciousbias in the #legal pro… https://t.co/TicS2qmoYH

🏆⚽️| The Opening Ceremony of the Biggest Football Tournament for Law Firms in #Nigeria is here!!! The 18th Bankole… https://t.co/ZCYnoLOr8k

Are you starting out your career or just looking for a change? We have an exciting opportunity for someone to join… https://t.co/8QrSdSt0Yn

Are you looking for a training contract that offers high quality work from reputable businesses in scenic South Wes… https://t.co/pxcfRlKcoZ

We were delighted to host @ItalianChamScot in our #Edinburgh office last week! Places available for the next worksh… https://t.co/T3eVeJ5D7P

Here are a few shots from our joint event with @lrmplanning which focused on Residential planning and development u… https://t.co/4Xk9QPWEBo

Our Events Team visited @Only1Argyle Home Park last week. We are looking to hold some of our events here in the fut… https://t.co/EOLb21vOhM