ADVOC Asia held its Annual General Meeting at the Marriott Hotel in Lima, Peru on 7 November 2015 as part of the ADVOC Joint Conference. Given the distance and cost involved it was good that around half of ADVOC Asia members were in attendance by one or more representatives.

Firstly we were pleased to admit as new members:

Siwatibau & Sloane of Suva, Fiji. This firm will be an important firm for reference to any of the Western Pacific Nation States.
Winston & Saleem based in Lahore, Pakistan. We are pleased to increase our representation in that area.

We welcome both new members and look forward to their involvement in future meetings. 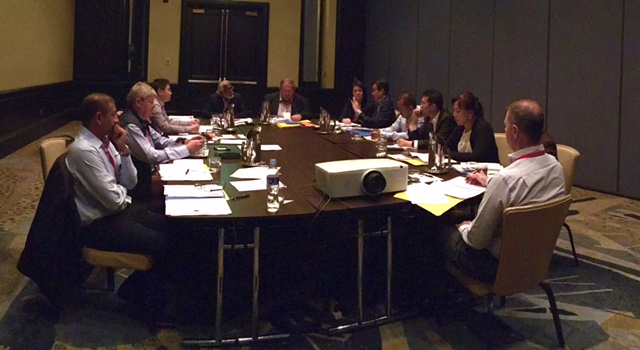 Jude Benny reported on the third International ADVOC Business Law Conference in Bali held in September. Details of that seminar were contained in the previous Gazette. It was decided that a fourth conference will be held in August 2016, also in Bali.

Financial statements were received. ADVOC Asia has adequate reserves and set its annual membership fee at US$1,500, which is no change from the previous year. This is proving sufficient to cover the operating costs of ADVOC Asia and also its contributions to the ADVOC Global Network.

A major decision was taken regarding future conferences. Given both the cost of attending conferences over the large geographic region of Asia, and the out of office time cost of attending meeting, it was decided that ADVOC Asia would meet only once per year with its Annual General Meeting. In addition, it would have a meeting during each Joint Conference. As a result, as Joint Conferences are held every second year, ADVOC Asia will in alternate years hold either one or two conferences.

It had previously been agreed that the next Annual General Meeting for ADVOC Asia will be held in Brisbane, Queensland, Australia on 20-23 October 2016, to be hosted by CGW.

ADVOC Asia agreed to propose to the Joint Meeting that the next Joint Conference be held in Mumbai, India. Whilst there was discussion at the meeting that October would be a suitable month in which to hold the Joint Conference, for climate and practical reasons that seems not possible. Accordingly, ADVOC Asia has asked that the host firm Dhruve Liladhar & Co provide details for a Joint Conference to be held early in November.

All in all the networking of our members and the activities arranged by the host firm all contributed to making the ADVOC Asia participation in the Joint Conference a success. Members are looking forward to our Brisbane AGM later this year, to which all Network members are invited.

are other key regulators that either complement the roles played by the primary regulators or act as the major regu… https://t.co/VmF6fxUU3n

In the previous post on this series, we dealt with the core regulators governing the Fintech space in Nigeria – the… https://t.co/g4Ezx9gWlE

...in collaboration with the Association of Banks’ Legal Advisers and Company Secretaries. #AlukoandOyebode

There are a variety of laws that apply to the import, sales, and use of drone technology in Nigeria. These regula… https://t.co/DbTAnVMxRJ

We are pleased to have hosted 18 interns in the month of September at the Aluko & Oyebode Lagos Office.… https://t.co/3xMVnhqOxO

We congratulate our Of-Counsel, Gbenga Oyebode on his recognition as a great legal mind in the Law and Justice Edit… https://t.co/HBDlJ82lL4